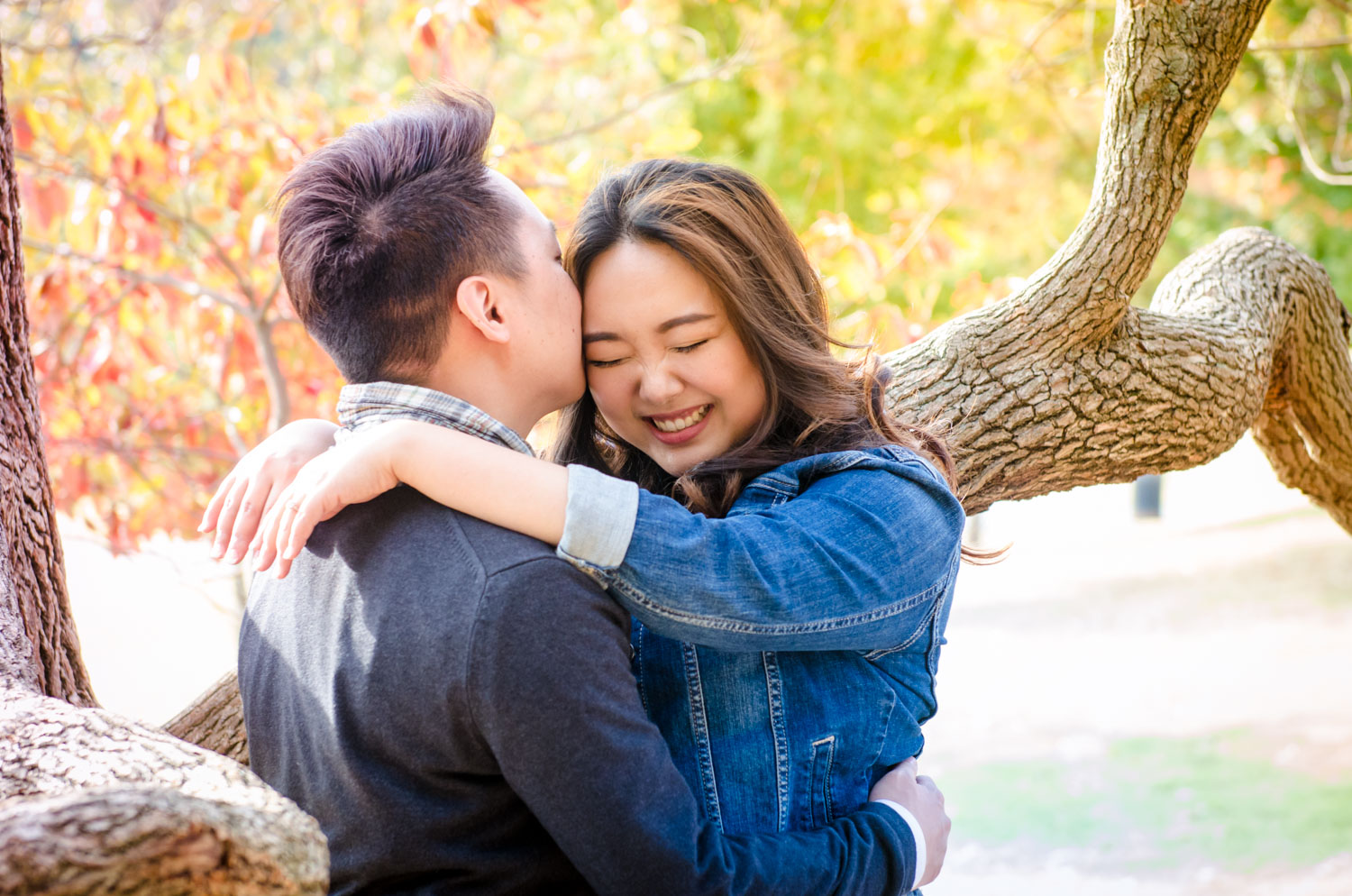 If you’re looking to take engagement photos at Piedmont Park, it is perhaps one of the most scenic parks in the downtown Atlanta area!  With Lydia & Duk, we got to take a couple killer night time skyline photos with the city lit up.  Definitely an Atlanta wedding photographer favorite!  Special shout out to Megan Quintana Artistry for a beautiful makeup job well done!

Below is a quick interview + engagement photos highlights with Lydia & Duk! 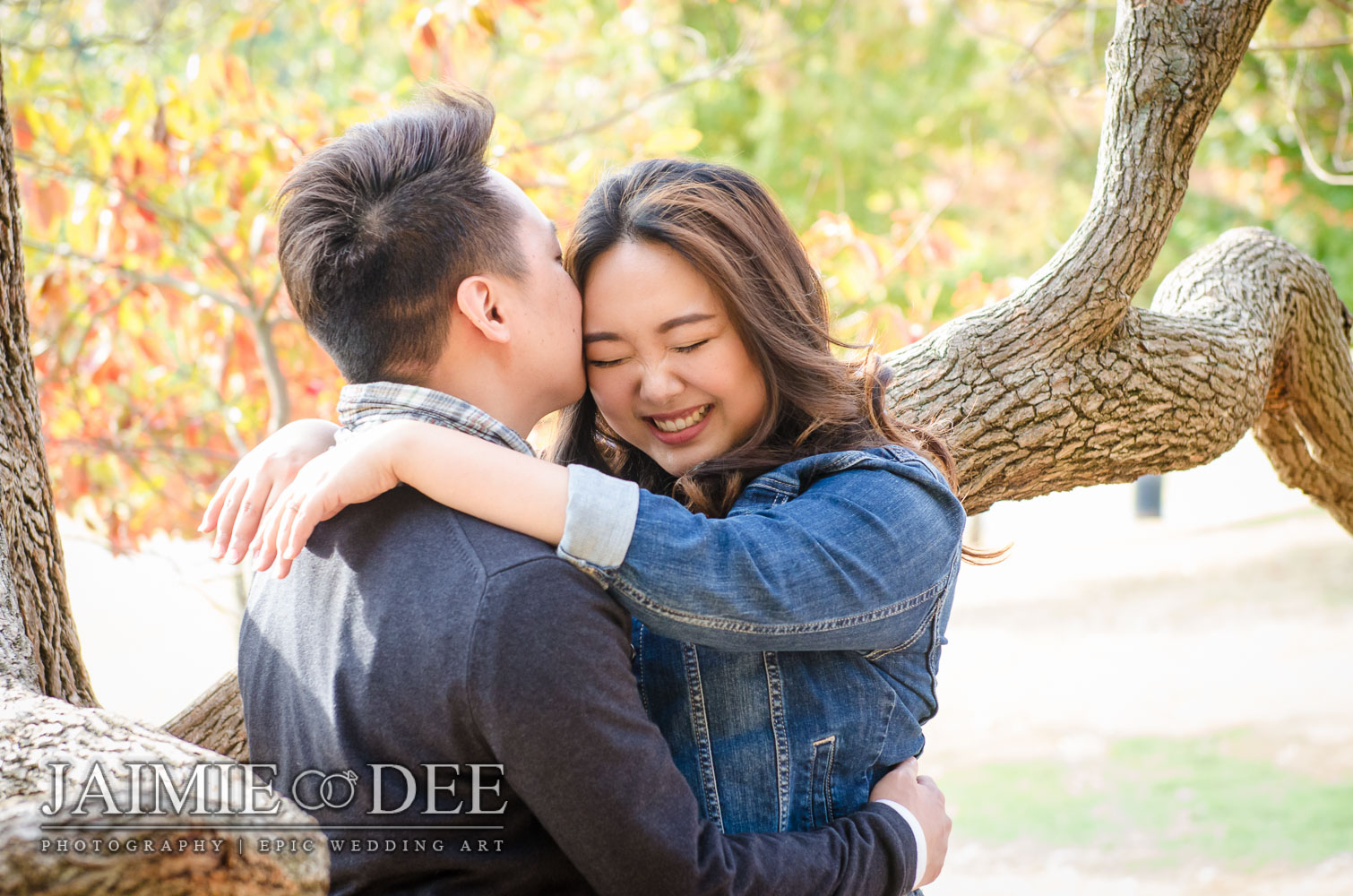 How did the two of you meet? What were your first impressions? Was it love at first sight?

We met through an online app that linked us through mutual friends. We started chatting back and forth for over a month. There was definitely chemistry between us. We were both pleasantly surprised at how easy it was for us to just talk and how down to earth the other person was. 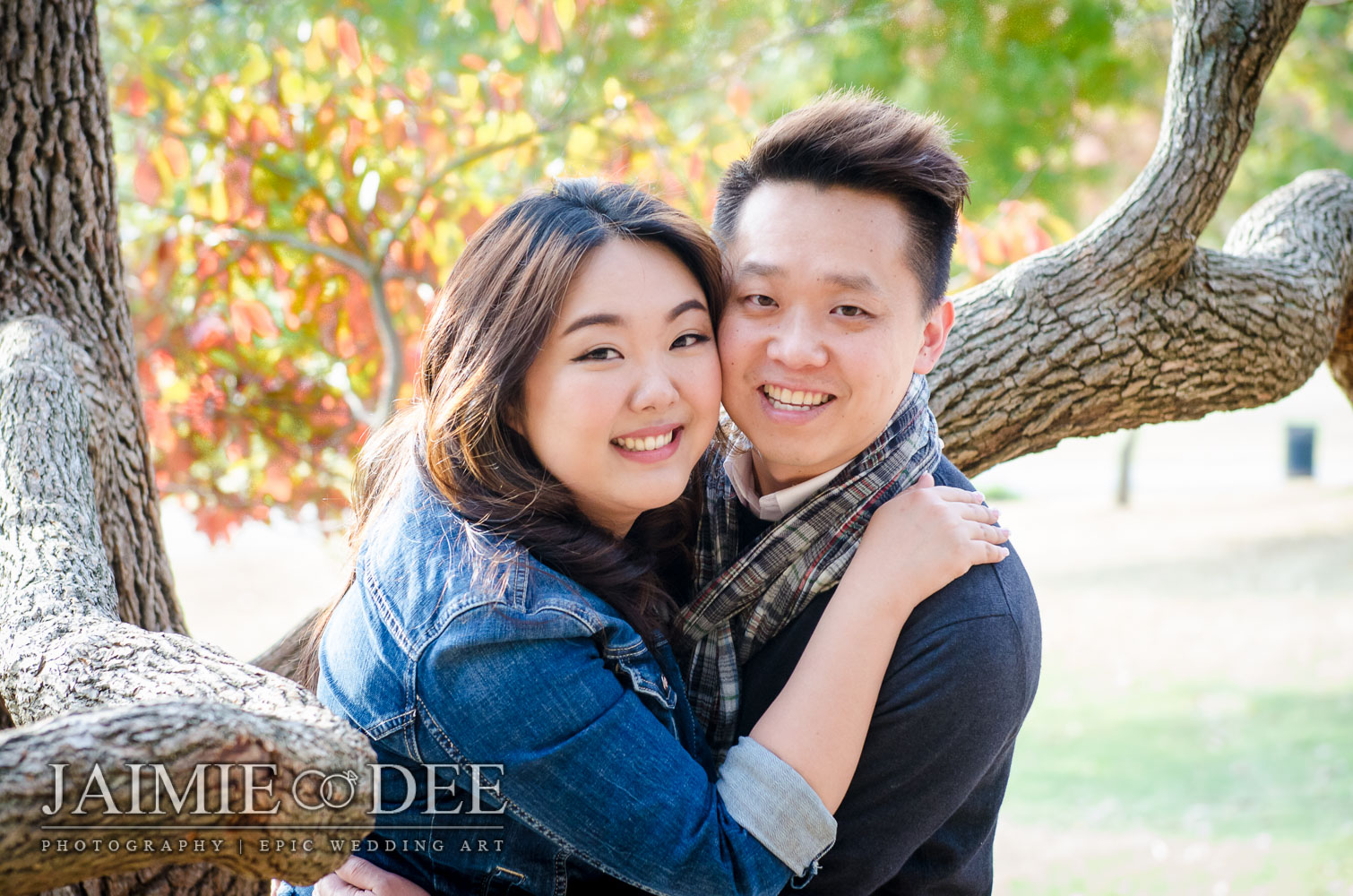 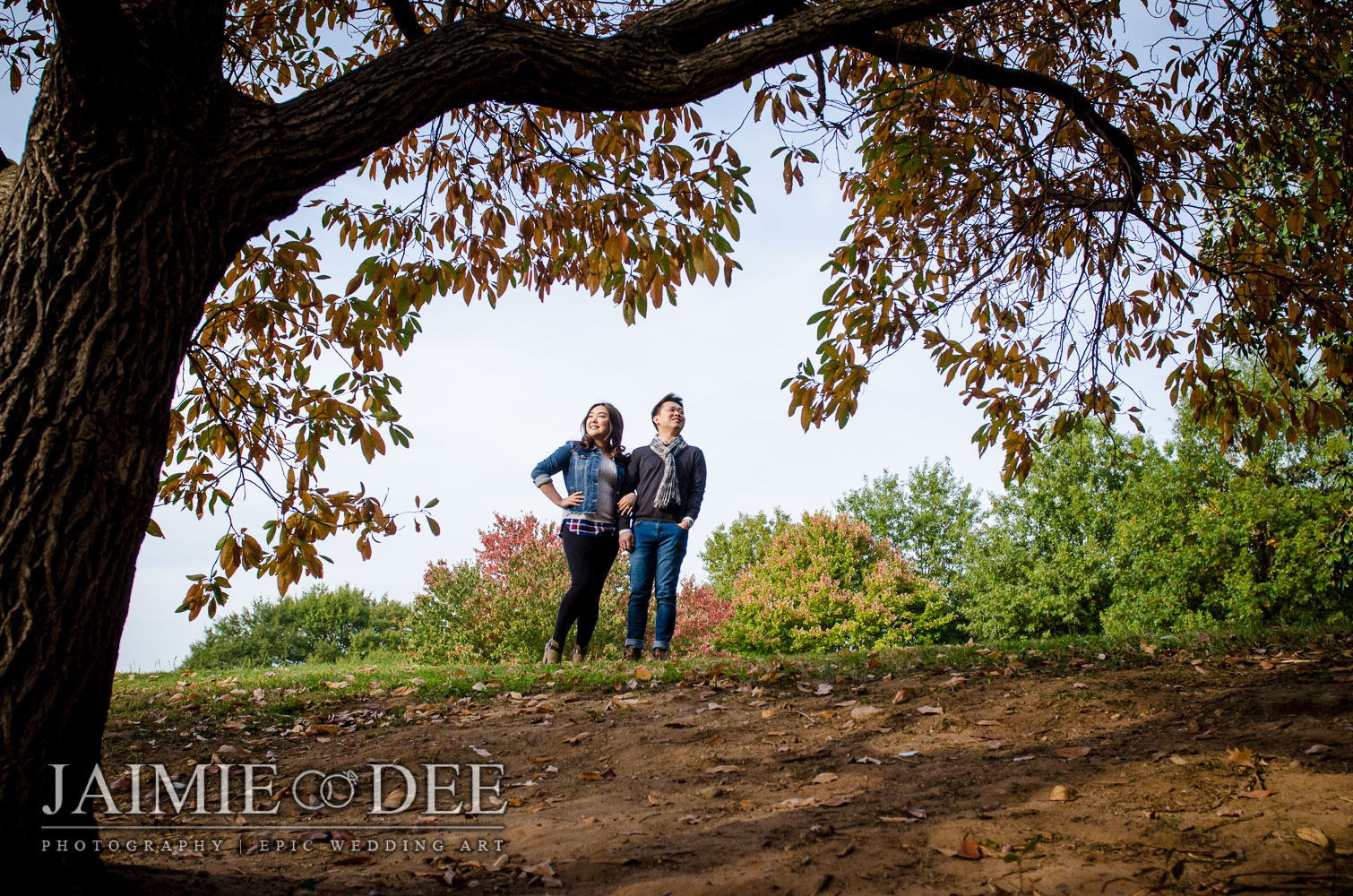 What attracted you most to each other? How long before you started dating? Where was your first date? Were you nervous?

There were several things that attracted us to each other, but mainly it was how similar our values were. We could talk for hours! When we met online, we chatted with each other for over a month but hadn’t officially met face to face. When we finally did meet, our first date was lunch at Whiskey Bar Kitchen in Augusta. We were both nervous because we already loved this new friendship, and we didn’t want to do anything to mess it all up. Duk’s long drive all the way to Augusta certainly didn’t help his anxiety. We met for our date around noon, then sat outside a Starbucks and talked and talked well into the night. We ended up staying there until almost 4 a.m. By the end of that date, there was no question we had found something very special. 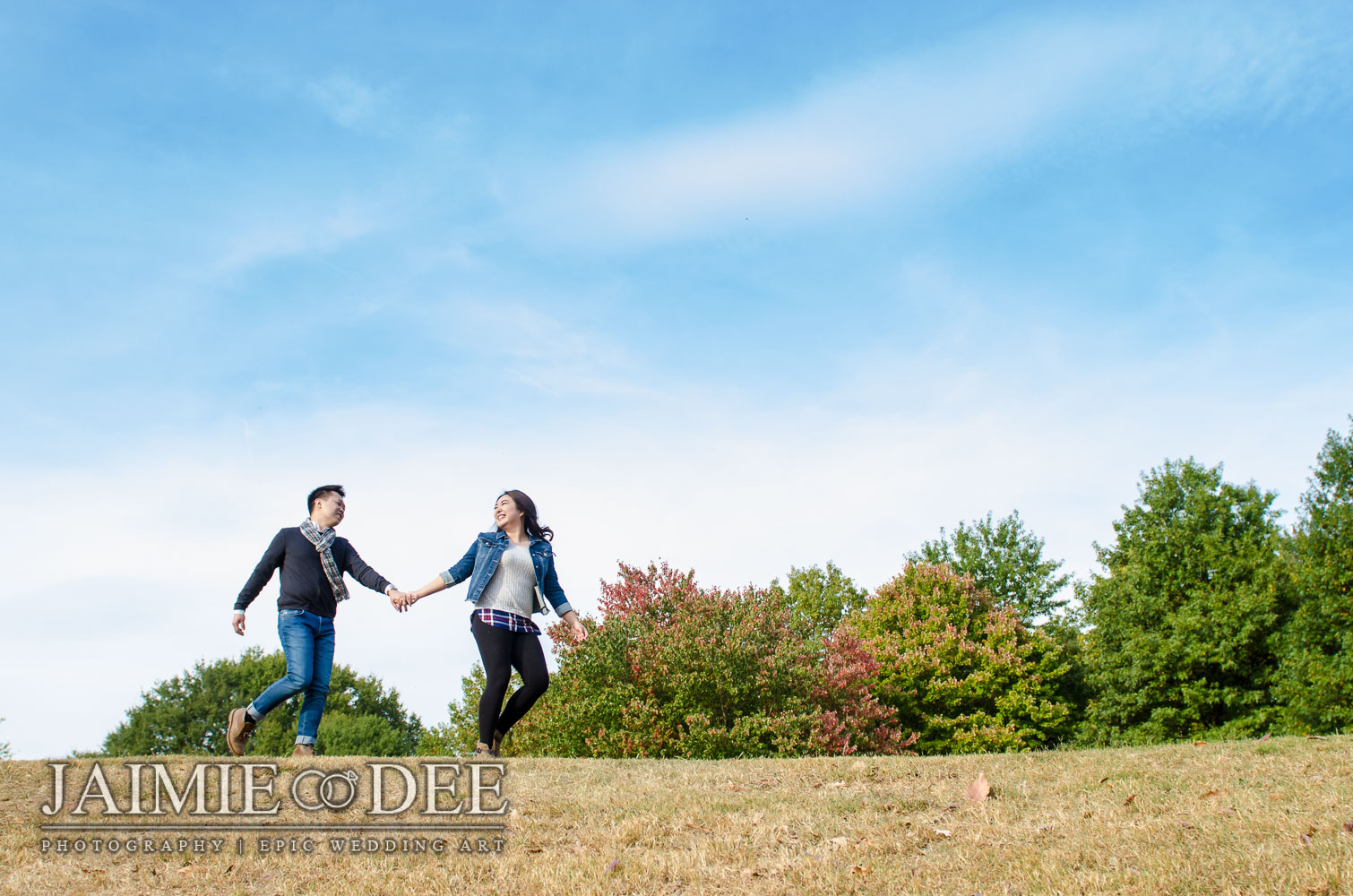 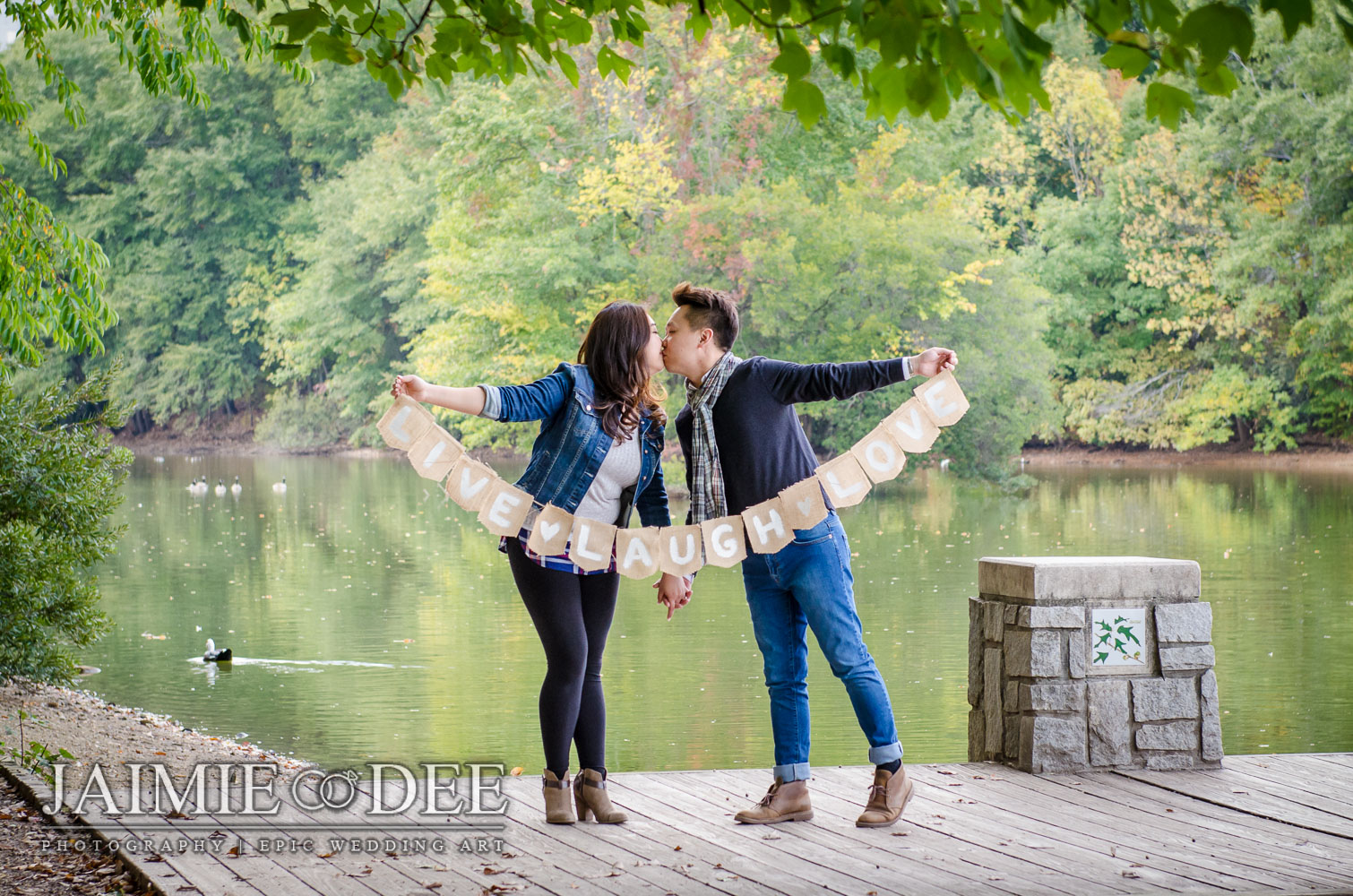 Duk: This person was different because of how she comfortable she made me feel. I know how weird I can be, but she would see it as me being dorky or cute. I was nervous about meeting her family because her parents are missionaries and I was wondering how much we would have in common, or if they had expectations that I couldn’t live up to. Lydia is not a big fan of the words “I love you”, because she believes that they would lose their meaning when overused over time. But one day I realized that I do really love her, and I told her so. She started crying. I sat there confused, wondering if I had done something terribly wrong. I’m glad to know that it wasn’t the case. She was happy and she loves me too.

Lydia: I can say with certainty that he is different from anyone I’ve dated because he is pretty much everything I thought I would never date. He’s a Florida Gator (I’m a UGA Bulldawg), listens to gangster rap and actually really likes math. He has a weird yet adorable sense of humor, and he makes me laugh even when we’re in the middle of an argument. I didn’t feel too nervous meeting his parents because I figured he turned out pretty well, so his parents can’t be that bad, right? And I was right… I told Duk later that I like his parents more than him 😉 As for the “I love you” part, that was somewhat of a dramatic affair that Duk mentioned in his section. I’m learning now that “I love you” only gets better with time when it’s coming from the right person. 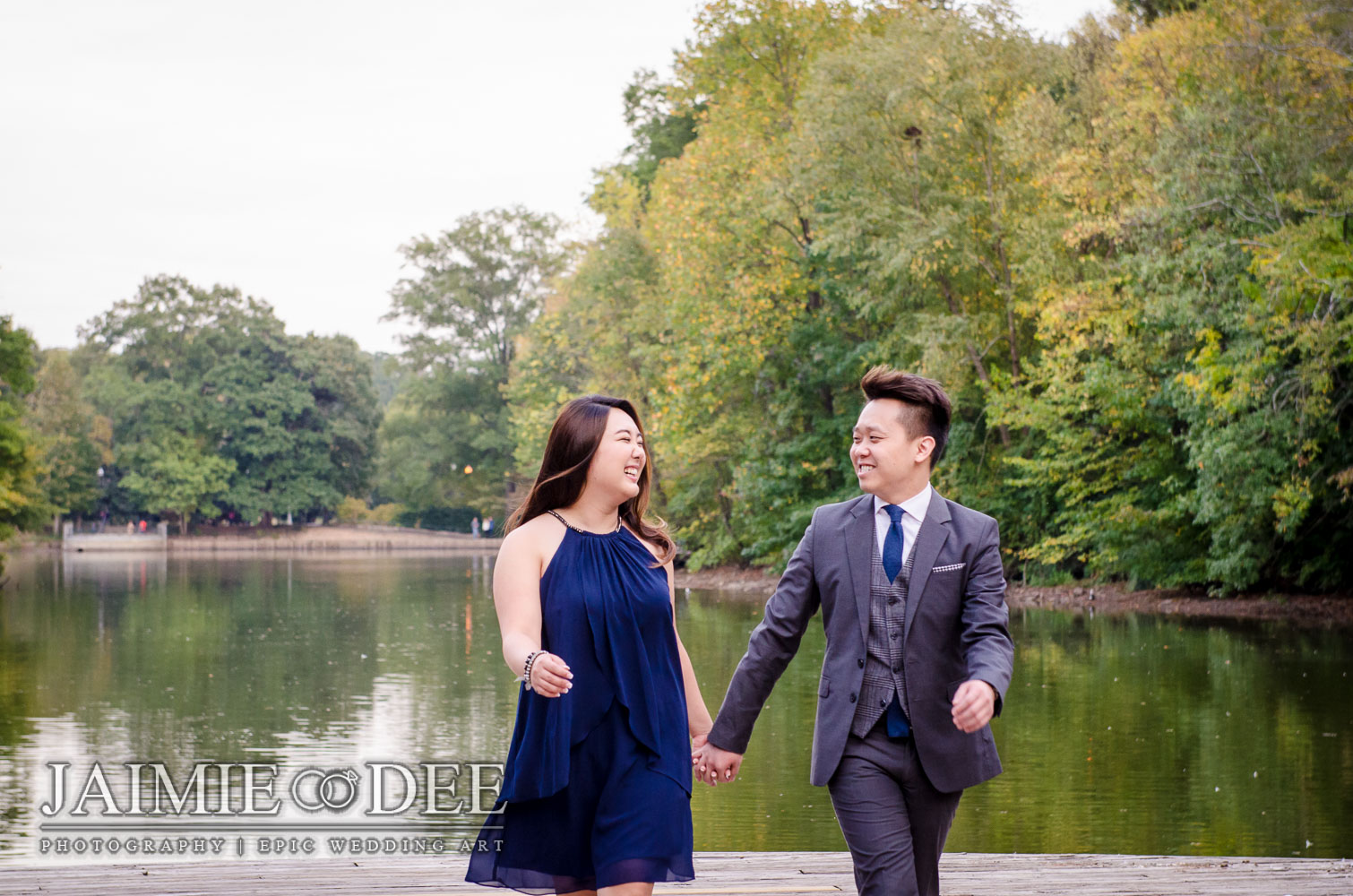 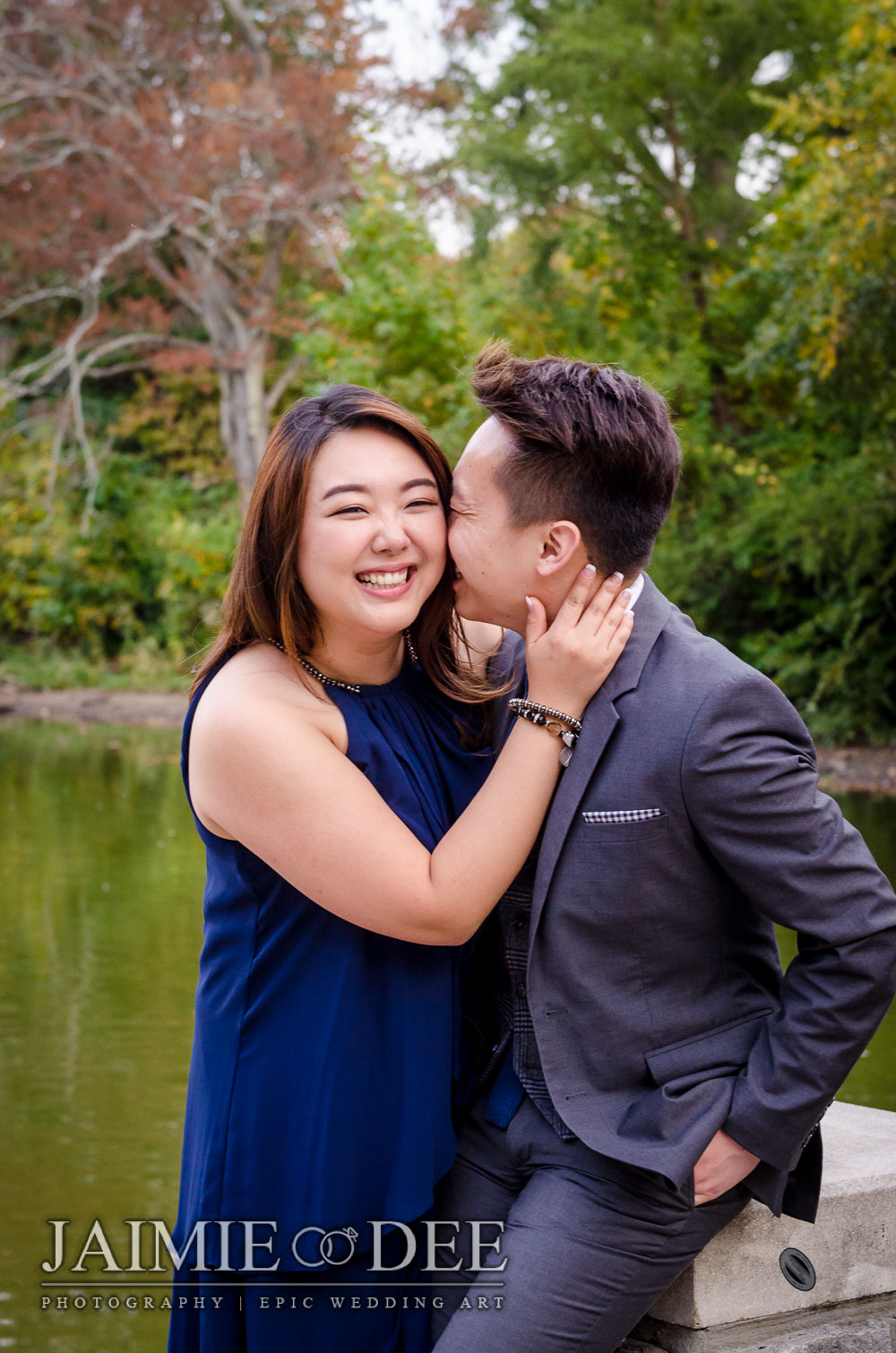 Duk: I knew she was the one when we hit about our 6-month dating mark. I realized that living life with her, the conversations that we have, and even the fights that we have were things that I could envision myself doing for the rest of my life. When I came to that realization, I thought to myself, “Finally! I feel like I’ve been in so many different relationships and life circumstances, and none of them made me feel the way I do now.”

Lydia: I’m not sure when exactly I knew, or how I knew. It was a gradual thing, he just grew on me and before I knew it, I was placing him in my plans subconsciously. It was like he just naturally became a part of my future. 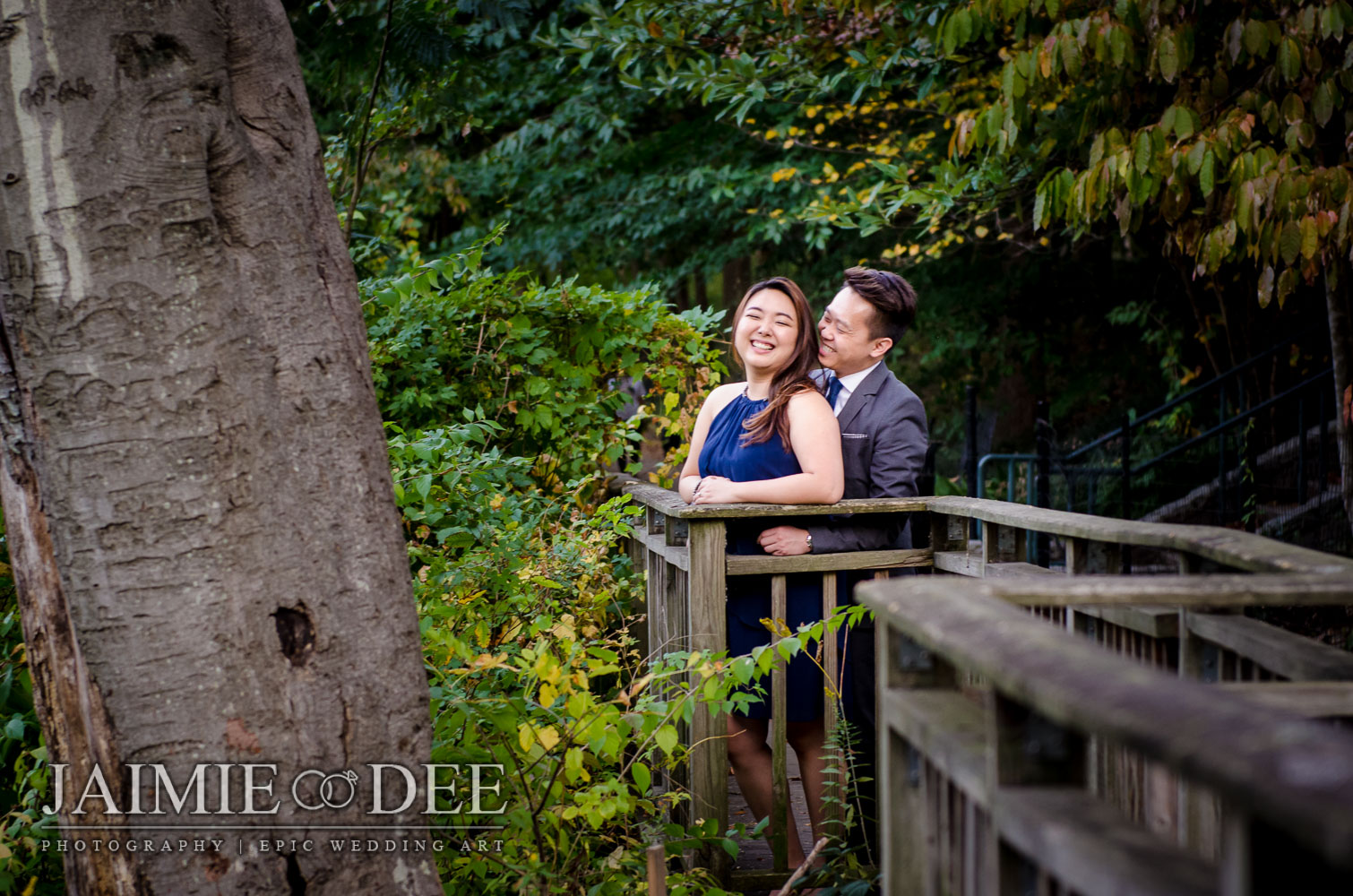 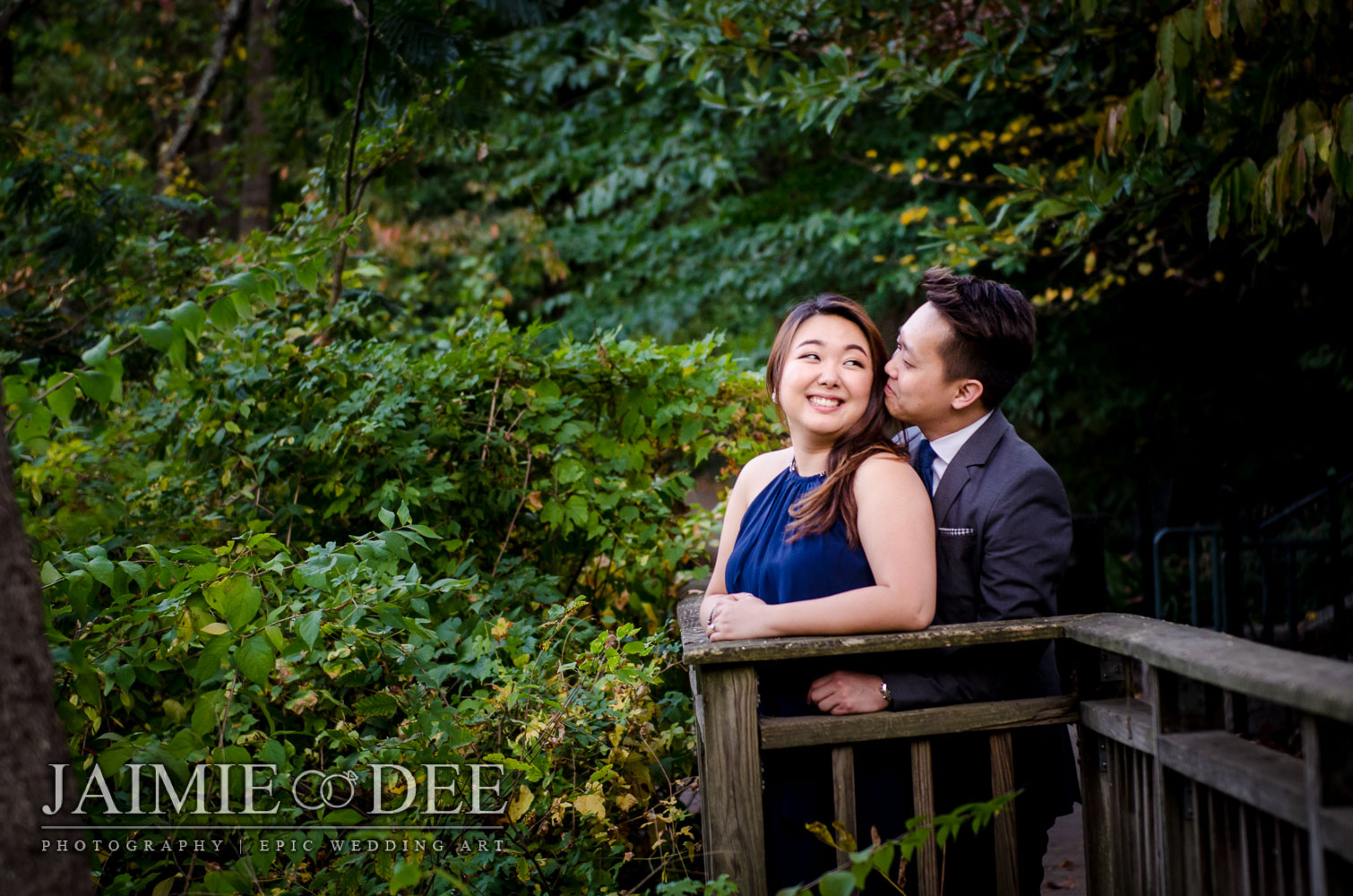 Duk: We decided to take a trip on the last week of March. I’m pretty sure she knew that it was coming but I knew that she didn’t know how I was going to propose. For the proposal, I took and modified Dr. Seuss’s classic book, “Oh, The Places You’ll Go” and added pictures from our times together. The last page of the book had her engagement ring tied to it with a ribbon with the words “So will you please marry me?” as the last sentence of the rhyme. We had initially decided to go to Rome for this trip, but plans changed and we ended up in Key West, Florida. Already, things were not going according to plan. I was nervous because originally, I had wanted to propose at sunset at the beach, but it was a cloudy day and there wasn’t a single area of secluded beach that I could find. Also, I was carrying the book and the ring around in my bag, so I kept thinking that she was going to find it by accident.

Lydia: Regardless of what he says went wrong, I think it was the most perfect proposal that could have happened between us. Of course I knew it was coming. Duk made some comments slip a few months earlier that helped me put two and two together… I think it was just as hard for me to act surprised as it was for him to propose! 🙂 The ring was gorgeous, the book he re-wrote for the proposal was so sweet, and he looked so happy… there isn’t a thing that I would have changed. 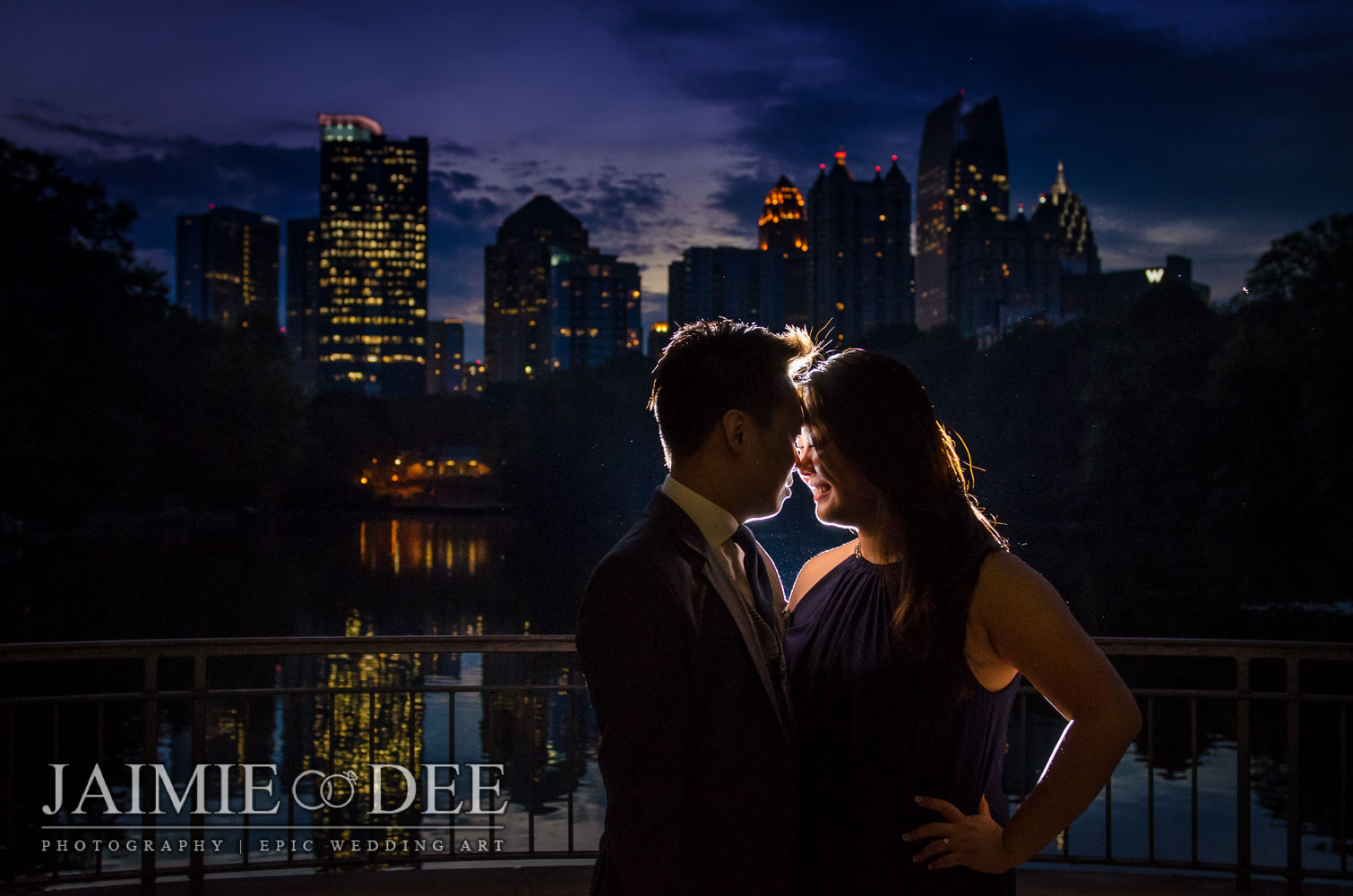 What’s the one thing about each other you couldn’t live without?

Duk: The accountability. I love that she keeps me accountable for the things I do, the things I say, and the way I think. Although I don’t always respond in the most positive ways, I know for the most part, she’s right and she’s saying those things because she ultimately loves me and she wants me to be at my best. That’s how I know that I couldn’t live without her in that sense because she makes me better than I am.

Lydia: He is one of the most patient people I have ever known. I know I have a lot of insecurities and it surfaces a lot, sometimes making me either really depressed or really defensive. Duk has a way of working through both, saying words of encouragement that go straight to heart of what’s wrong… and he genuinely tries to learn something new and improve his understanding of who I am. I know it’s hard, I know it takes patience and I know he bites his tongue a lot, and I appreciate that and love him for it.