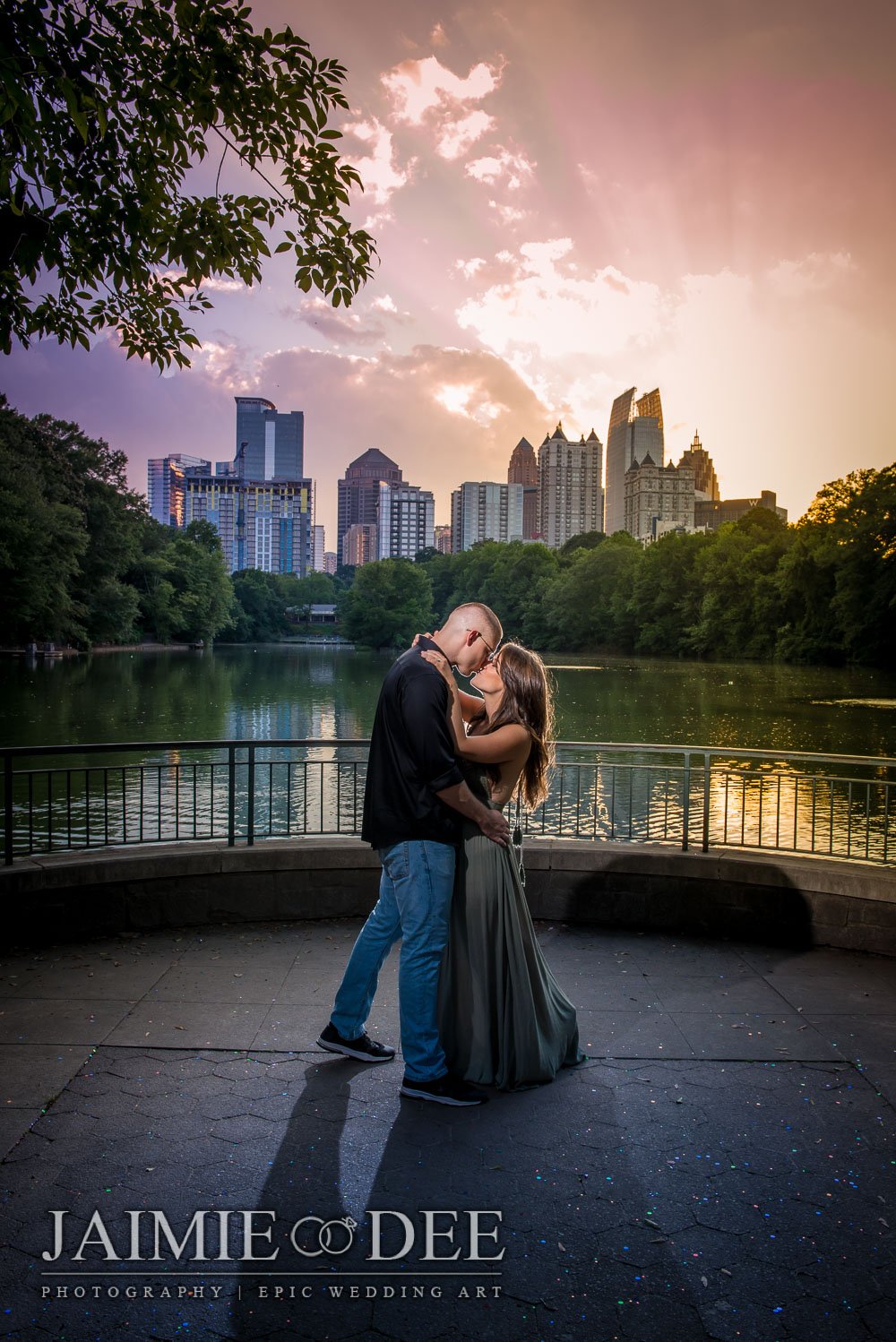 We couldn’t be happier at the thought of working with an amazing couple like Katie & Ben!  As an Atlanta wedding photography studio, we had such a wonderful time with these Piedmont Park Engagement Photos with this fun couple!

Below is a quick interview with the bride & groom along with a couple highlights from their engagement session!

Bride: I think my friends and/or family would have rightfully had me committed if I had said I was in love with a guy I had just met but there was definitely something about him that I couldn’t, and didn’t want to, walk away from. I knew of him through mutual friends but I had never really met him until everyone was in Tallahassee for a reunion football game, FSU vs Clemson. One thing I will never forget is the moment I saw him… he had this beaming smile and these big brown eyes that just melted me, then he turned around and I saw that great butt of his… game over.  Coincidentally, FSU will play Clemson on our wedding day.

Groom: Technically, we first met when I was back in Tallahassee visiting during law school. However, we really “met” during a reunion game in 2014 when a large group of mutual friends were in town, including me. I’ll never forget how gorgeous she looked in that blue dress and I could tell there was something special about her and something great about the two of us together. 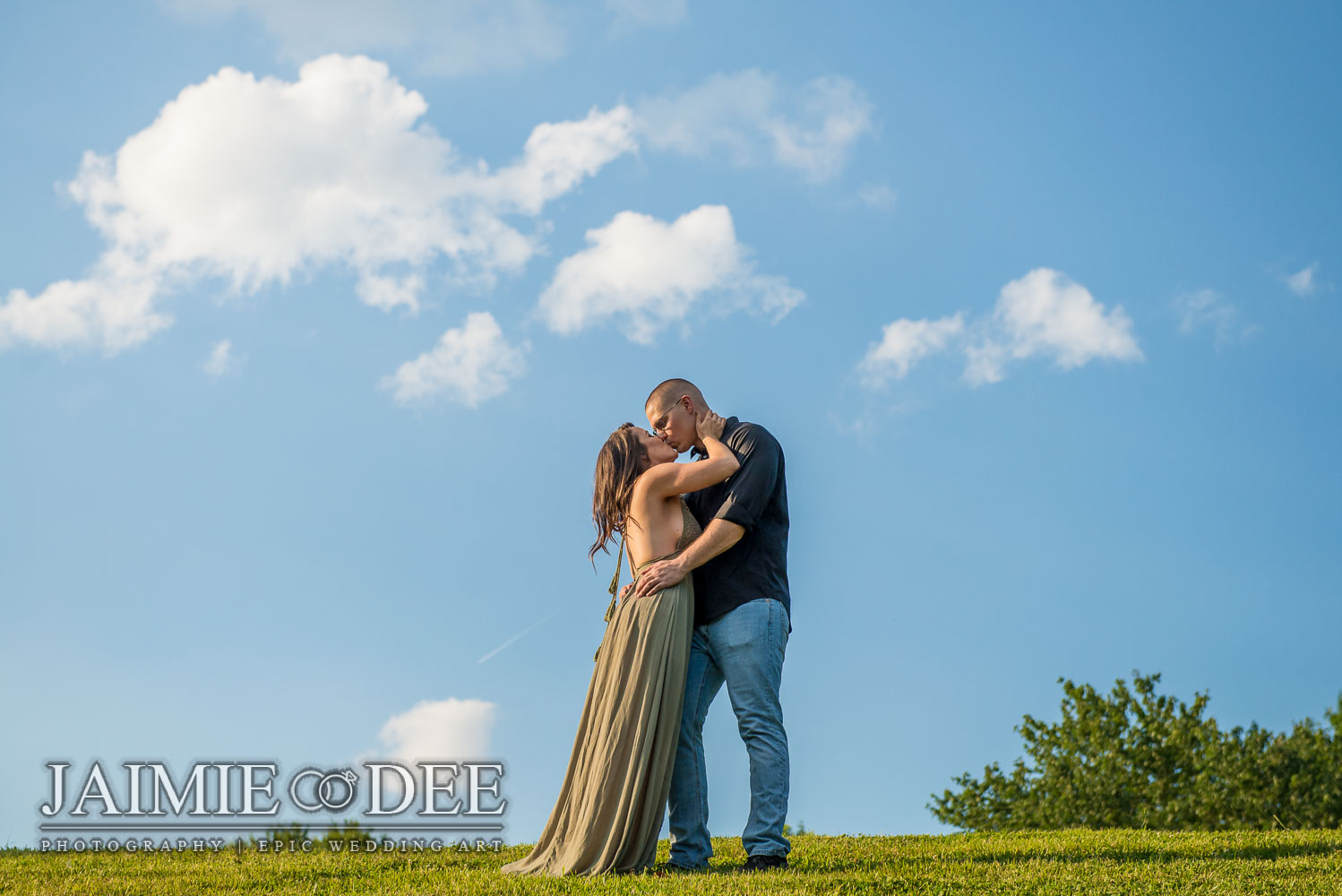 How/ when did you start dating?

Bride: At first we didn’t live in the same town so it was a lot of texting and phone calls for a few weeks. Our first date was about as close to “a sign” as you could get. Ben and I met up at a brewery, I hate beer but decided to just go with it, and when I sat down I believe his exact words were “the hard cider here is dank.” I smiled because that was the only drink on the menu I liked (and who still uses the word “dank”) and I could just relax and be myself. One of the things I love most about Ben is, by just looking at me, he has the ability to calm me, not once have I been nervous around him.

Groom: We started dating several weeks after that first meeting but we had been texting non-stop during the interim. At the time I lived in Tampa and she lived in Tallahassee and our first date was after she came down for a potential job interview. I love so many things about Katie, when you really make her laugh its infectious and adorable but her eyes and smile are what always draw me in. 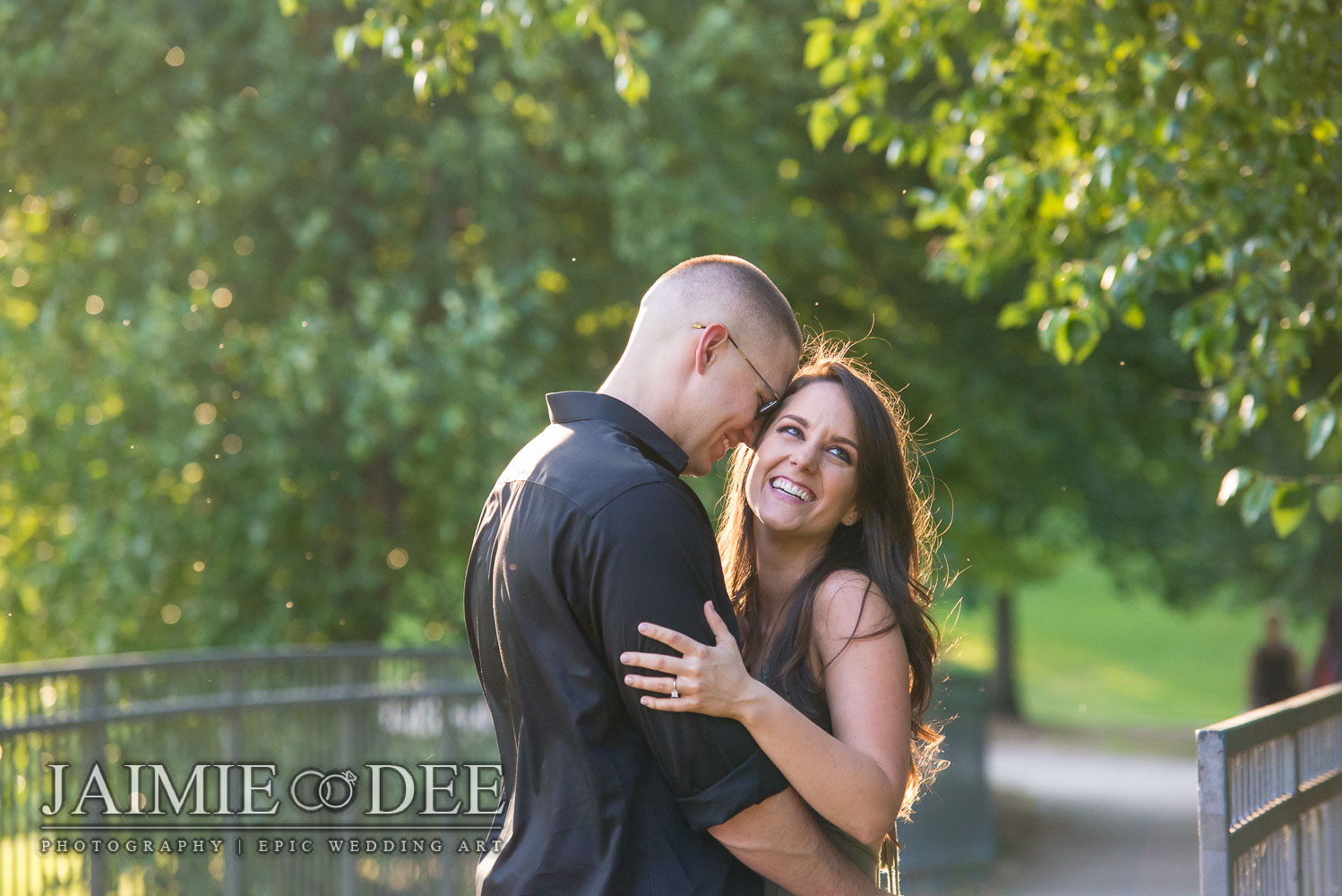 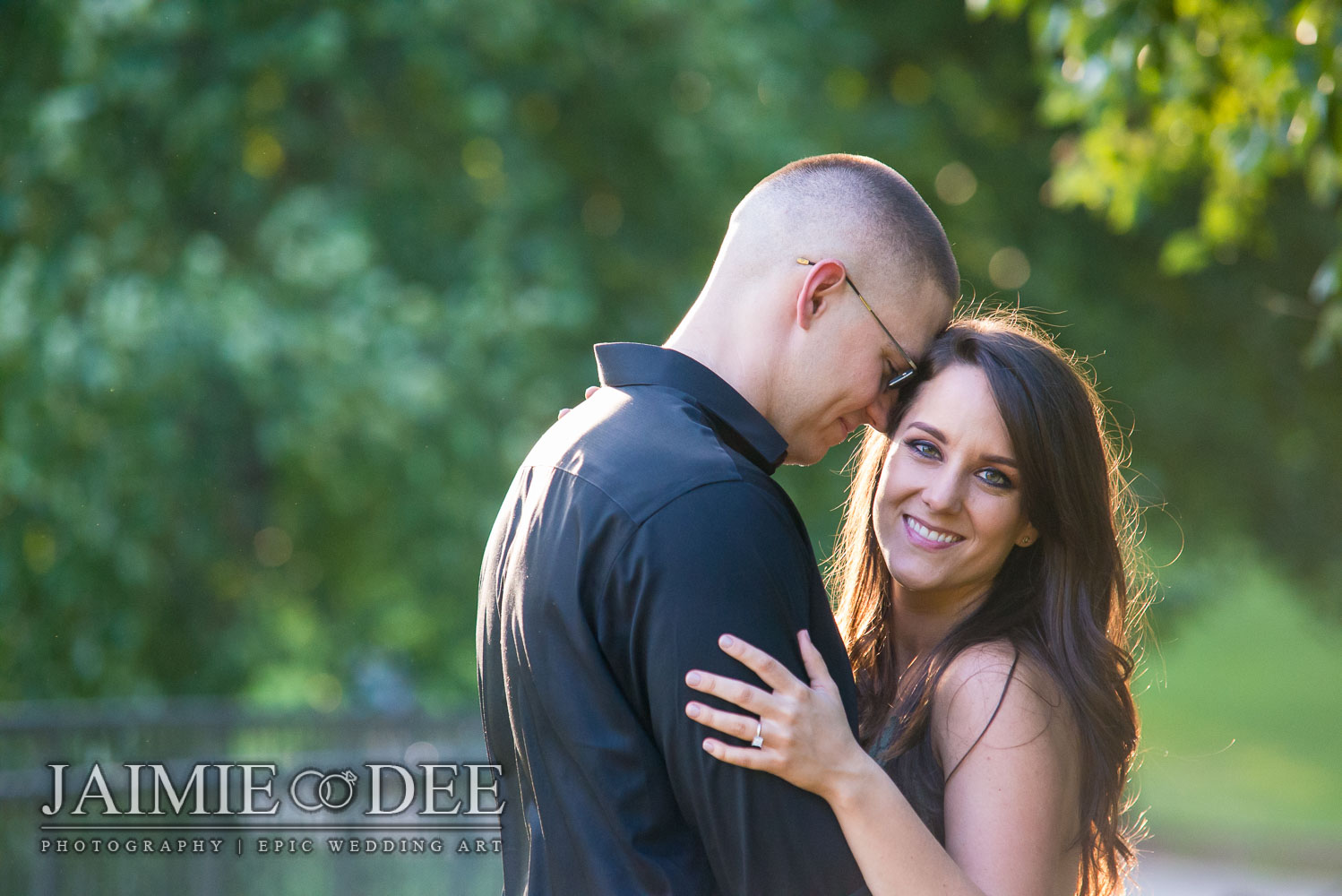 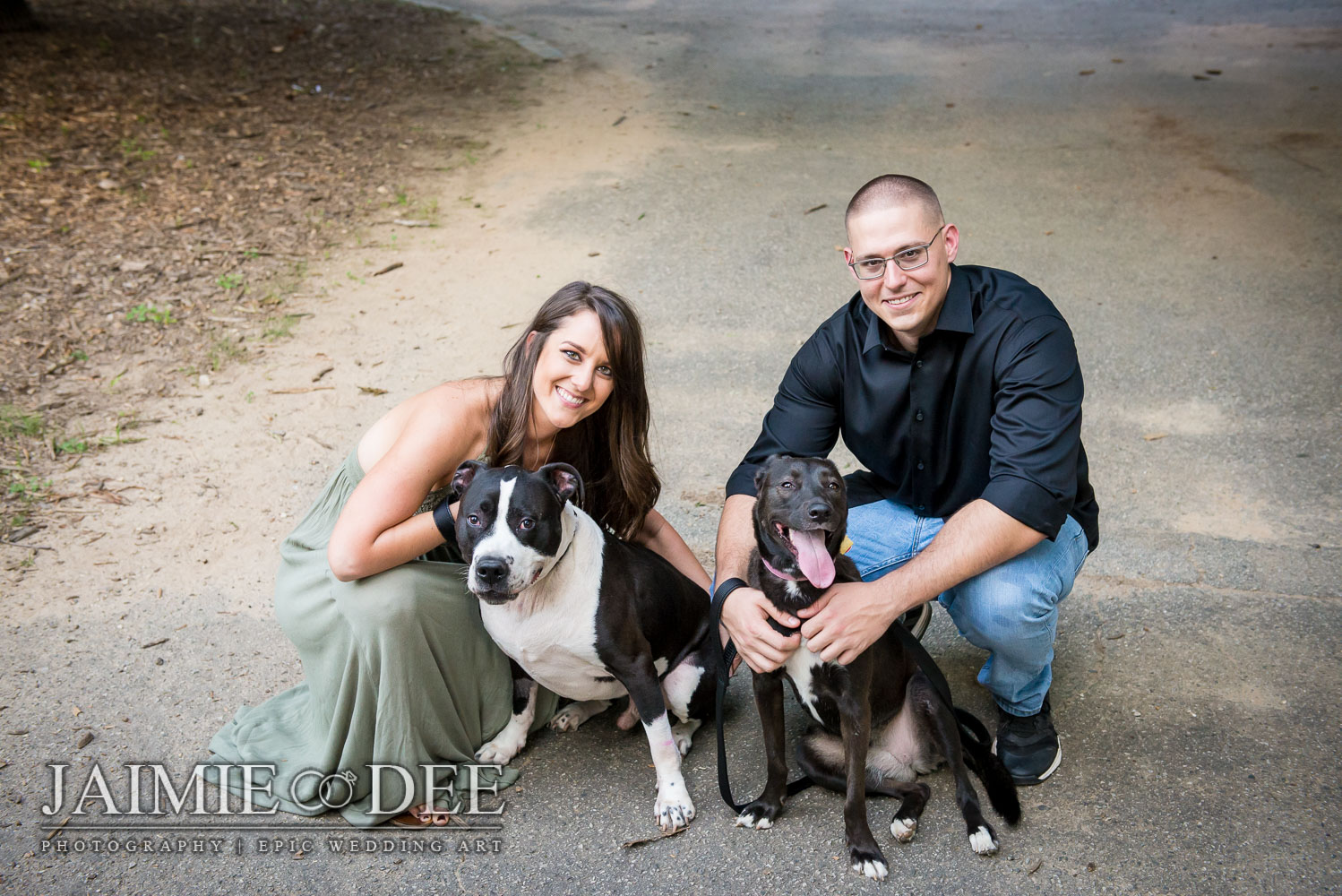 Bride: I think what was so different was how effortless it all was, we just fit perfectly. Ben will probably say he said “I love you” first but that’s a lie… we have just agreed to disagree on this subject. In the end it doesn’t matter who said it first but that we both felt it and still feel it every day.  I was excited to have Ben meet my crazy family, I knew he could handle it, and with no surprise he fit in seamlessly.

Groom: There isn’t one thing alone that makes Katie different, but everything that makes “us” different. While we don’t always finish each others’ sentences or anything weird, we just share a connection that I haven’t felt before. The way she listens to, looks at and laughs with me always makes me feel truly loved. She’s an amazing girl and I’ve never been nervous to introduce her to anyone, I knew my family would love her. I said “I love you” first but to be fair, we were both going to say it that night and I think we both knew we were in it for the long haul before speaking those words. 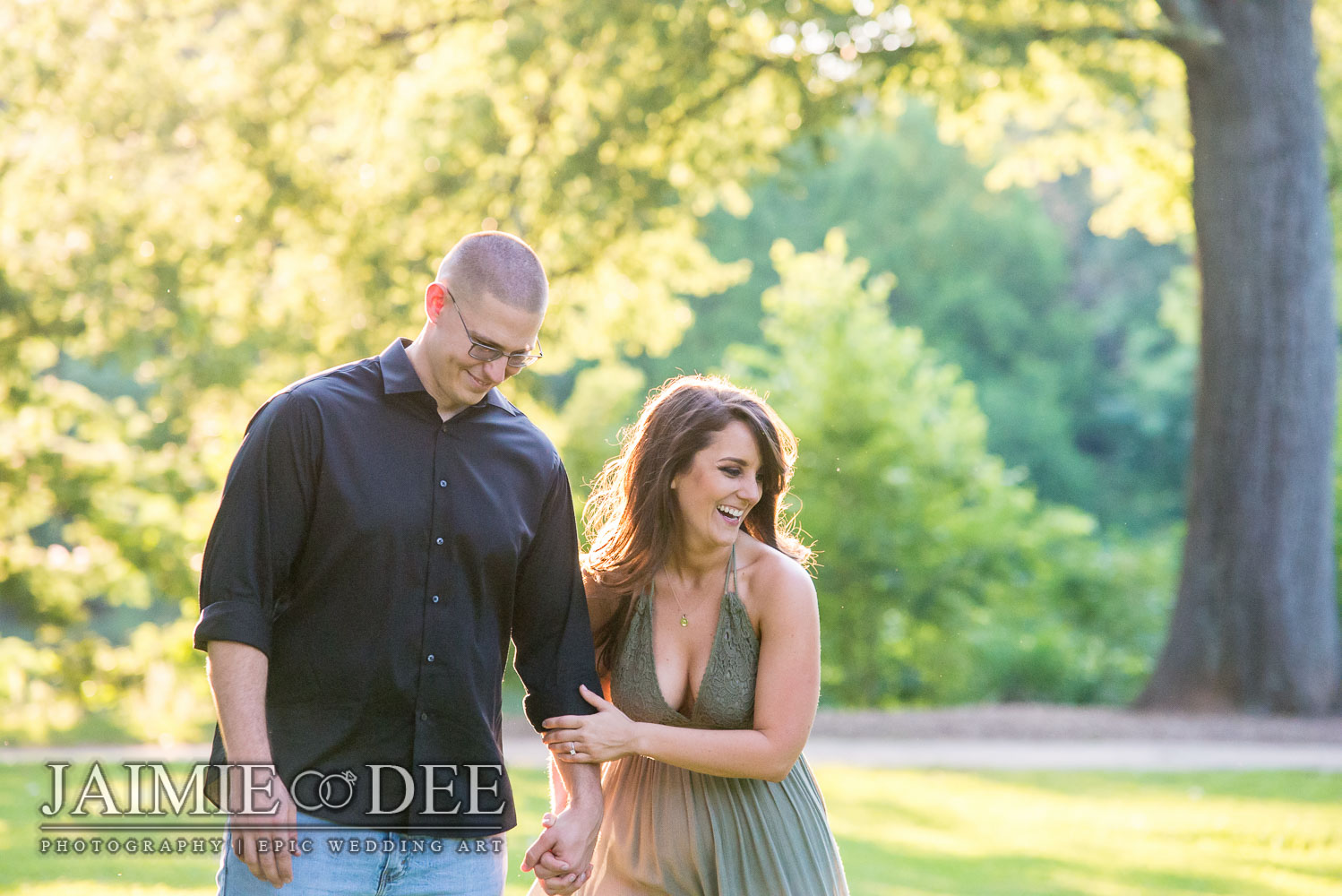 Bride: I think everyone around me realized it before I did. My ridiculously adorable grandfather told me he liked Ben when he hadn’t even met him yet because of how happy he could see Ben made me. I knew Ben was the real deal because he supports and loves me for who I truly am, whether that is freaking out up the side of a mountain, grabbing his butt in public or obsessing over the two cutest dogs in the world, Enzo and Tally.

Groom: There have been so many times its hard to pick just one, it was more of something I knew all along but realized slowly as we got to know and live together. However, one of the first times I really thought that we’d go the distance was during her first visit to Atlanta. She agreed to hike Stone Mountain with me despite never hiking before and being terrified. She did great and made it to the top without ever complaining and I didn’t even know she was scared till later in the weekend. To me, being willing to face your fears because you trust your partner says a LOT about a couple’s relationship. 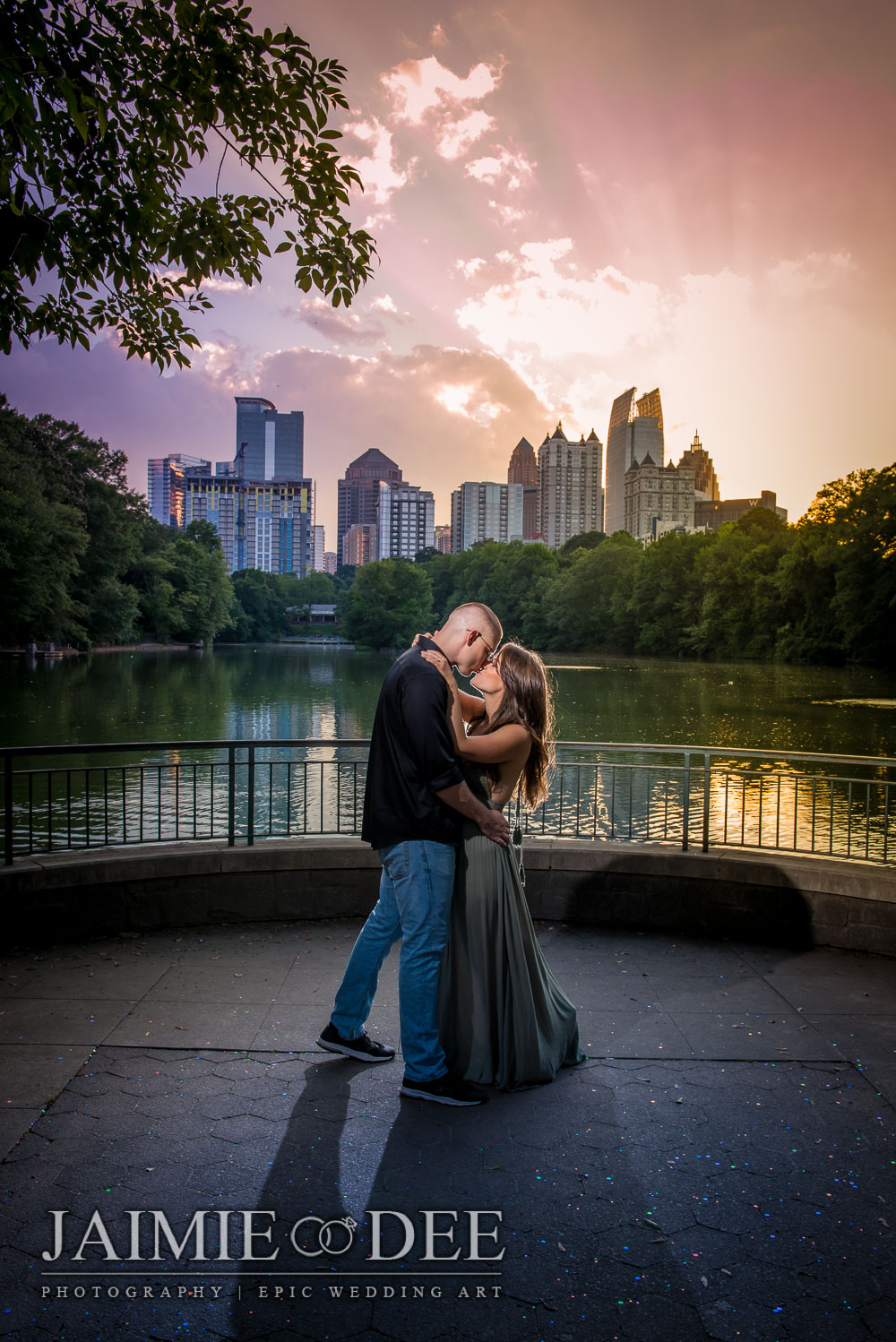 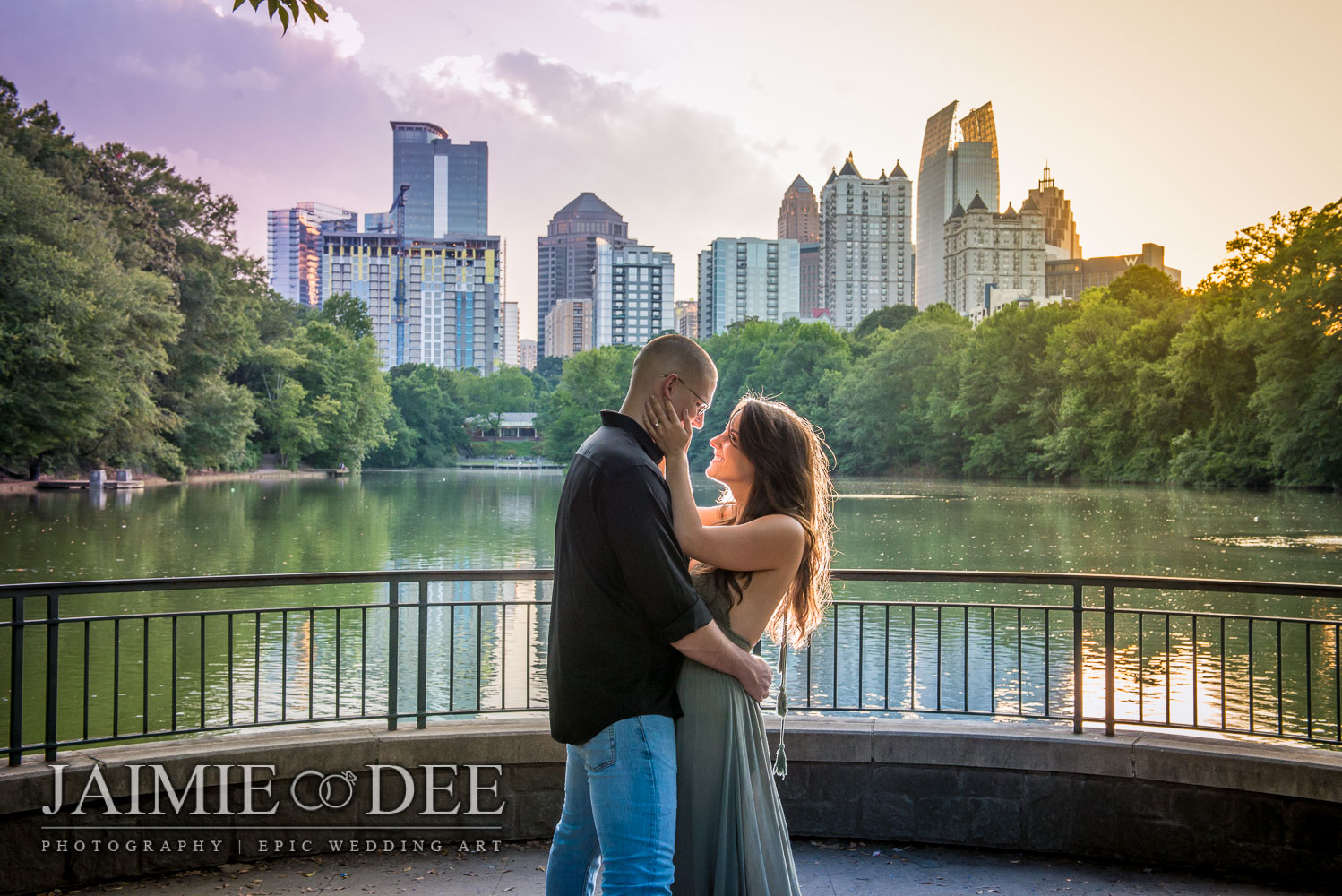 Bride: Ben faked me out pretty good, he had me convinced that the Grand Canyon would be too expected and that I would NEVER see the proposal coming. When I was standing in front of one of the most amazing sights I had ever seen, I would never have imagined there could be anything better until I turned around and saw Ben on one knee. I was so surprised and caught off guard that I may have said some words my mom and dad might not be proud of but my answer was “hell yes!”

Groom: I wanted somewhere truly timeless, that will never change and we can always come back to so I picked the Grand Canyon. We headed out west for New Years and after showing her the desert and hiking Sedona the day before, we walked the Grand Canyon rim trail until I found the perfect spot, got down on one knee and the rest is history. 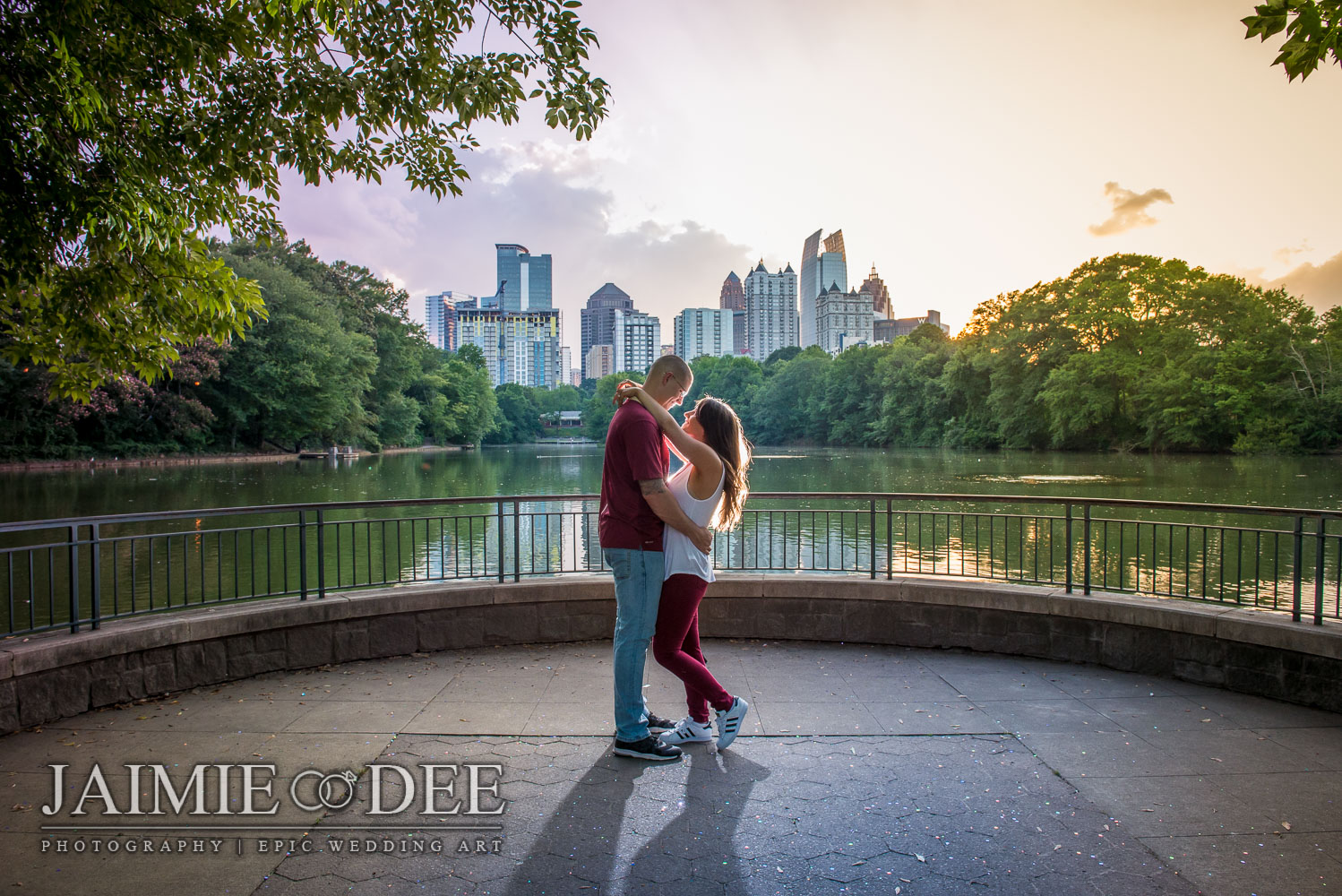 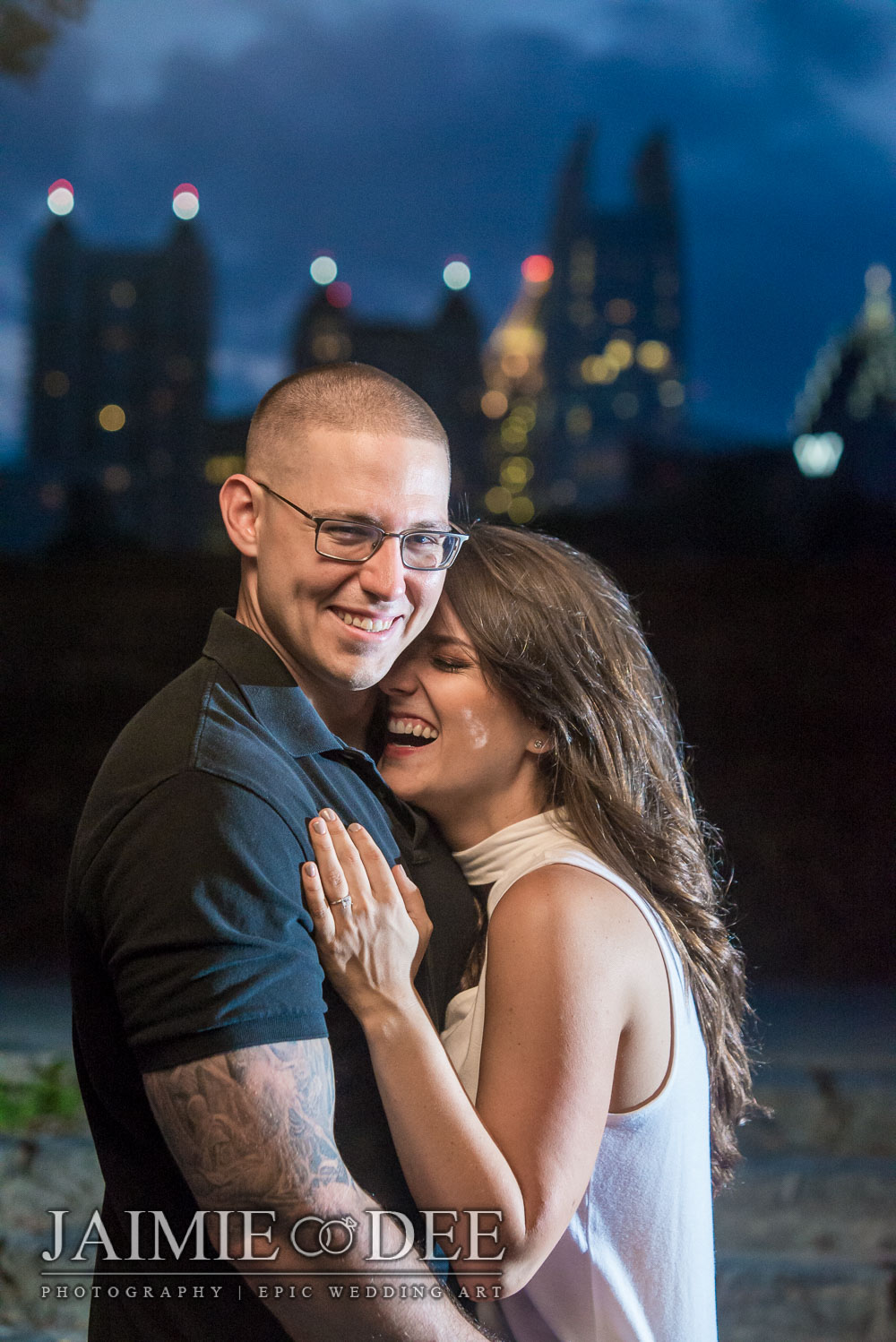 What’s the one thing about each other you couldn’t live without?

Groom: I couldn’t live without her in my life, but I just have to see her smile at least a handful of times every day, preferably after I make her laugh. She’s my one.

Bride: Ben tells me I hug him like a little kid but the reality is that I love having his arms wrap around me, it feels like home to me. He’s my only.